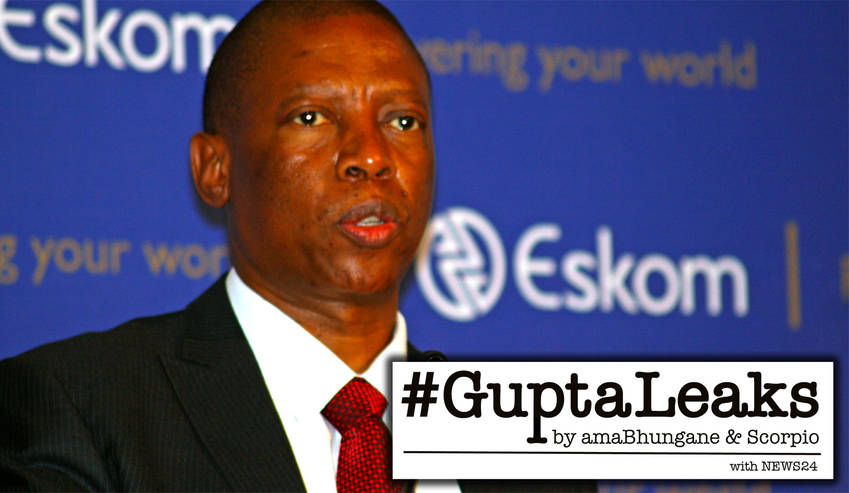 In another sign of the Guptas’ control over appointments at state-owned companies, the #GuptaLeaks show that they received Collin Matjila’s CV shortly before he was appointed acting CEO at Eskom in 2014.

The CV was then forwarded to an employee of the Guptas’ Sahara Computers and Duduzane Zuma – President Jacob Zuma’s son and a business partner of the Guptas.

At the end of that month Matjila, who had been on the Eskom board since 2011, replaced Brian Dames as CEO in an acting capacity. His short tenure would soon turn into a boon to the Guptas’ TNA Media, publisher of the overtly pro-government newspaper The New Age.

The business breakfasts, now reportedly being cancelled by the SABC, were regularly broadcast live on the state broadcaster at its expense. They featured prominent political figures, including President Jacob Zuma.

Those widely seen to be in the Zuma camp and close to the Guptas are heavily represented at these events, which have raked in large sponsorships from state-owned entities and which industry experts say are a major money spinner for an otherwise struggling newspaper.

Now, the leaked emails corroborate amaBhungane’s previous report of the exorbitant sums Matjila lavished on the The New Age’s flagship television show, and at a time when the power utility could ill afford it.

On 4 April 2014, just after Matjila had moved into his new role, an email containing a proposal for renewing and expanding Eskom’s sponsorship of the business breakfasts was sent from Nazeem Howa, the CEO of Gupta-owned Oakbay Investments, to another Gupta employee, Ashu Chawla.

The proposal, dated to the previous month and addressed to Chose Choeu, Eskom’s executive for corporate affairs, reads: “It is with pleasure that we submit the following proposal for the period 1 April 2014 to 31 March 2015 for sponsorship of 12 Business Briefings for a total investment of R14,400,000.00, excluding VAT and agency commission.”

Email correspondence from about a month after the proposal was circulated shows TNA Media’s business development manager Wiedaad Taliep and Eskom’s Choeu arranging a meeting to “discuss the breakfasts logistics and related issues”.

On 6 May, Chose wrote that the “the contract has been signed by our CEO”, referring to the business breakfasts.

That correspondence was then forwarded to Atul Gupta.

The amaBhungane report from later that year stated that “the new contract for R43-million allegedly approved by Matjila commits Eskom to sponsoring roughly one monthly briefing for three years”.

If the R14.4-million cited in the proposed contract were to be extended to three years the figure would be almost identical to the alleged R43-million.

That report alleged that the final contract was especially onerous because it did not contain an exit clause – something that Eskom’s lawyers had allegedly raised with Matjila before he signed off on it.

The deal caused such concern at board level that the chair of its audit and risk subcommittee raised the alarm with Public Enterprises Minister Lynne Brown.

At around the same time as the business breakfast deal was being hammered out, Eskom also entered into a new contract for the bulk buying of copies of The New Age.

Attached to the same email containing the business breakfast proposal was a newspaper subscription agreement between Eskom and TNA Media, effective 1 May, 2014.

The unsigned copy of the agreement committed Eskom to purchase 4,000 daily copies of the The New Age over a period of 36 months. The cost was calculated at the full cover price of R3.50 at 256 publishing days per year, plus 50 cents on each paper for delivery.

The total cost for a year’s subscription: R4,096,000. No discount was offered on the cover price – highly unusual for such a large purchase.

The agreement tied Eskom down by stating that it shall remain “in full force and effect indefinitely” unless either party were to terminate it by “giving to the other Party six months’ written notice of termination”.

The TNA business model relies heavily on government contracts for advertising and subscriptions.

The paper receives a disproportionate share of government ad-spend while the private sector has been largely unwilling to advertise in a paper that does not release comprehensive audits of its circulation figures.

The Guptas’ government-focused business strategy was stated unambiguously in recently leaked emails concerning a plan to take over the Mail & Guardian newspaper.

The emails show that the plan to make the Mail & Guardian profitable was to steer it in the same direction as The New Age – adopt a pro-government editorial position and attract government ad-spend.

According to Nielsen figures, this approach netted The New Age R2.2-million worth of advertising from South African Airways, R3.4-million from the SABC, and R4.5-million from Transnet for the year ending 31 October, 2016.

Fin24 reported in 2015 that SAA had spent R9.4-million to purchase nearly six million copies of the paper.

For Eskom, relations with TNA Media did not begin when Matjila took the helm. The utility has publicly stated that it had dealings with The New Age since 2011, and between 2011 and early 2014 it had spent at least R12-million on 10 business breakfasts.

But Matjila appears to have been particularly eager in dispensing largesse to the Guptas, and this in a year when the cash-strapped state-owned company faced major delays and cost overruns with new power station construction, was on the brink of another load shedding crisis, and was desperate for a bailout after a shortfall of hundreds of billions of rand.

Asked if the volume of Eskom’s expenditure on The New Age could constitute wasteful expenditure, Eskom gave the following generic response: “Regarding the incidence of fruitless and wasteful expenditure in general, Eskom regularly reviews its internal control processes to minimise the risk, and where an incident occurs Management takes appropriate measures to deal with the matter, including disciplinary action and/or criminal or civil action against those involved, as considered appropriate.”

Eskom did not answer detailed questions, including those regarding the role of Matjila. It also did not respond to follow-up questions.

Gupta lawyer and regular spokesperson Gert van der Merwe has refused to comment on #GuptaLeaks claims, saying: “I have no documents or context or instructions. It is inappropriate.”

Matjila’s link to the Guptas can be traced back to his chequered history as chief executive of Cosatu investment company Kopano ke Matla, where he was implicated in a number of cases of financial mismanagement before resigning in 2014 when he took up his executive position at Eskom.

Under his watch at Kopano ke Matla the Financial Services Board picked up a web of suspicious payments including one of R1.3-million to a company he owned. In response, Matjila told the FSB the payments were “personal commissions”.

Cosatu also commissioned its own forensic report in 2013 in an attempt to get to the bottom of numerous allegations of financial misconduct at its investment arm.

This showed that Matjila had only handed over a summary of the FSB report to Cosatu while he sat on the full report.

The Cosatu report also alleged that Matjila undersold an old Cosatu property by as much as R9.5-million, and paid an inflated price for a new property – R6.3-million more than it was worth.

It found that the task team led by Matjila that negotiated the property transactions was “informally assisted” by Essa, the Gupta associate who sent Matjila’s CV to Tony Gupta. It added that Kopano had previously worked with Essa through Inca Energy, an entity jointly owned by Kopano and Essa.

Matjila’s tenure at Eskom, first as member of the board’s tender subcommittee and then as acting CEO, was also marked by his involvement in the awarding of a controversial R4-billion contract to replace ageing steam generators at Koeberg nuclear power station.

The never-ending tender would drag on for years as Matjila and other political appointees at board and ministerial level appeared to use every opportunity to block the bidder preferred by Eskom’s technical teams.

The tender was originally awarded in 2011, with the lion’s share going to Japanese-American corporation Westinghouse, and a smaller portion of the deal going to its French rival Areva. But it was halted by then public enterprises minister Malusi Gigaba, who claimed that Eskom had not received ministerial approval.

Eskom reopened the tender process in 2012 and the following year Eskom’s technical team reaffirmed its choice of Westinghouse as the preferred bidder. But when its decision was taken to the board’s tender subcommittee, then chaired by Matjila, it stalled again.

Matjila appeared to be creating a parallel tender process by bringing in external consultants who reported to him and contradicted the work of the Eskom technical team and backed Areva.

As the process dragged on into the second half of 2014 Matjila, then acting CEO, and Matshela Koko, acting group executive for technology and commercial, co-signed an unsolicited memo recommending Areva.

Despite Eskom’s technocrats continuing to support the cheaper Westinghouse bid, the tender committee awarded the contract to Areva. After a drawn-out legal challenge by Westinghouse, the Constitutional Court ruled against setting aside the tender award to Areva.

AmaBhungane tried numerous times to contact Matjila on several phone numbers linked to him. He did not answer, nor did he respond to text messages.