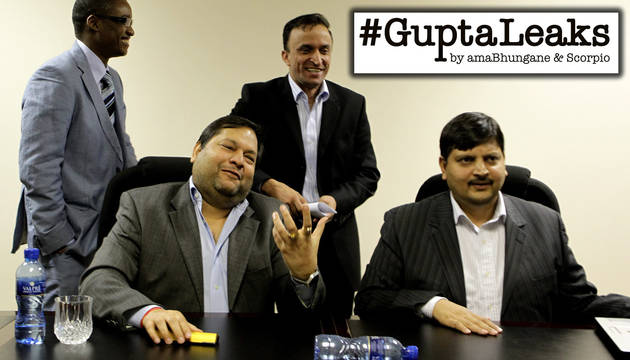 Further indications of the Guptas’ racist attitudes towards black people have surfaced in a newly discovered email from the #GuptaLeaks.

“. . . they have tenant from 1 October, R15k per month but he is Nigerian. Still looking for someone else,” an employee of the Guptas’ Sahara Computers wrote in an email to Atul Gupta in September 2015.

Gupta apparently disapproved of the idea of leasing the property to a Nigerian.
“No to point one,” Gupta replied to the Sahara employee, in reference to the proposed leasing.

In the email, Sahara employee Rana Kumar updated Gupta on four properties the family appeared to have been leasing to tenants.

The email appears to suggest that the Guptas had a prospective tenant for a property in Century City in Cape Town in 2015, but because the would-be renter was Nigerian, the family would rather keep searching for another tenant.

The Guptas, who did not respond to News24’s queries, have denied past allegations of racism “with contempt”.

But other emails from the #GuptaLeaks suggest that the Guptas’ generally view black people as being inferior to them.

The incident, tellingly, was described in a letter from a Sahara employee to security firm G4S Security in which Gupta’s actions were defended.

According to the letter, two guards stationed at the entrance to the Saxonwold compound did not hear Gupta calling them on one occasion, supposedly because they were “engrossed in some other activity.”

“The incident aggravated Mr Tony so much that he called them monkeys,” the Gupta employee wrote to G4S Security, apparently oblivious to the possible consequences of detailing Gupta’s alleged racist slur in writing.

‘ALL staff are white!’

The #GuptaLeaks have also revealed that the Guptas apparently routinely made use of racial profiling in an attempt to employ white employees instead of black South Africans.

Planning emails sent before major Gupta functions show that it was standard practice for “hostesses” to be hired from modelling agencies, with the agencies sending through photographs of potential women in advance to be selected or rejected.

The Guptas and their associates on numerous occasions expressed a preference for white candidates.

“Please see below the profiles of girls that have confirmed availability. I need to get more white ladies,” read an email from one such agency in August 2014.

That statement could be read innocently, were it not for the fact that there was some evidence from the leaked emails show that the Guptas had a distinct preference for hiring white people in certain areas.

Before the wedding of Vega Gupta at Sun City in 2013, the family made inquiries to hospitality agencies about hiring waiting staff and butlers. In response to a phone conversation with Tony Gupta, an agency called Heilbron Hospitality sent through a quote for hiring staff in February 2013.

Under “Terms & Conditions”, it stated: “Heilbron Hospitality confirms the provision of all Caucasian staff, with the majority of the waiters and a few of the butlers being female staff.”

Tony Gupta appeared not to have read the quote closely, because he replied to the email on the same day: “Please clarify total staff gender and race…”

A Heilbron employee wrote in response: “ALL staff are white! I included this point in the final quote.” It was not just the butlers and waiters at the wedding that the Guptas wanted to be white women, however.

An email from the manager of the Gatsby Spa at Sun City reveals that Sahara CEO Ashu Chawla met with the spa management in April 2013.

The email was sent later the same day. “Thank you for your time this morning, it was certainly interesting,” it begins.

“After discussing the matter with my fellow directors we have come to the conclusion that it would be in neither of our best interests to bring in part time white staff for your very important guests.” This suggests that the Guptas had specifically requested white staff for the event.

Racial profiling for job vacancies occurred elsewhere within the Gupta empire. An email sent by Tegeta director Ankur Sharma to Chawla in October 2012 stated that the mining company needed to recruit a “good office admin”, which Sharma specified should be a “senior old white lady with good experience”.

The Guptas have, of course, employed many black people. But another email, sent by a black Gupta employee in September 2014, claimed that the family treated its black workers especially poorly.

In the email, employee Tshepo Masilo berated the family for the meagre contributions they made to the families of employees who died in their service.

“The Gupta family is very wealthy, where you are able to spend more than R100-million for a wedding at Sun City, and yet you are unable to even give your poor employee who died without even earning a decent salary a good send-off,” Masilo wrote.

“It is very disappointing and hurting to see how you spent a lot of money donating to political parties and hosting events for very high profile figures and rulers of our country, and yet you do not take care of your struggling and lowly paid employees, especially blacks.”

Allegations that the Guptas had demanded white staff in certain roles for the wedding of Vega Gupta, the Gupta brothers’ niece, surfaced shortly after the event in 2013.

City Press reported that most of the bodyguards and butlers at the wedding were white and Afrikaans-speaking.

The newspaper also quoted a resort employee as claiming that black resort staff were made to clean themselves by a Gupta security officer before serving guests.

“The allegations of racism regarding the staff are definitely untrue,” a statement released by the Gupta family in response read. It said it rejected the claims “with the contempt [they] deserve”.