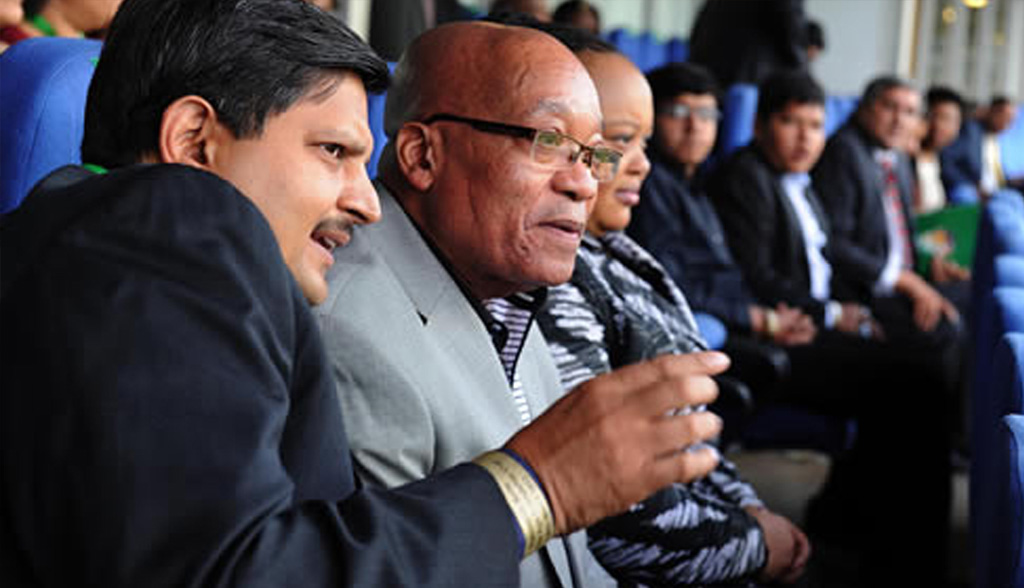 ANALYSIS
After eight disastrous years of a Jacob Zuma presidency, the Rainbow Nation dream of Nelson Mandela lies in tatters.

At an historic secret ballot of no confidence in the South African Parliament yesterday, the country’s scandal-hit president survived – but by a small majority of 21 as up to 40 of his own ANC MPs rebelled against him.

South Africa is now at yet another crossroads.

At the recent funeral of one of Nelson Mandela’s closest friends and fellow long-time Robben Island detainee, his ex-wife Winnie Madikizela-Mandela (herself an MP) said: “All what we fought for is not what is going on right now … our country is in crisis and anyone who cannot see that is just bluffing themselves.”

At the very spot in Cape Town where Mandela gave his first speech after his long walk to freedom in 1990, thousands of protesters assembled and then marched on Parliament today to demand Zuma’s removal.

This being fractured South Africa, they were joined by large numbers of pro-Zuma supporters.

Meanwhile, roads from the Mandelas’ one-time township home in Soweto into the economic capital Johannesburg were barricaded with rocks and burning tyres from early morning as protesters took action across the province.

A promising national economic blueprint dreamed up at the start of Zuma’s presidency has been abandoned.

The economy of South Africa – a member of the exclusive G20 club of nations — is now growing at half the worst-case scenario rate envisaged by the experts Zuma appointed five years ago.

State-owned companies — the supposed engines of economic growth and job creation in ANC’s economic policy – have stuttered and stalled.

The state electricity utility, the freight and passenger rail companies, the national airline and the arms manufacturer all enjoy near-monopoly status in South Africa, but are increasingly being propped up financially by the government.

To support them, public money is diverted from other urgently needed social programmes – education, health, housing.

It is here – in the beating heart of the country’s economic machine – that a huge corruption scandal threatens to engulf Zuma, his party and perhaps the country.

And it is a scandal that has been exposed by good old fashioned investigative journalism in the face of sinister intimidation and threats of violence.

Over the past several weeks, the terms “state capture” and #Guptaleaks have dominated social media in South Africa, but beyond its borders not much is known.

What are the #GuptaLeaks and ‘state capture’?

The phrase “state capture” has emerged to describe a situation where a business family, the Guptas, enjoying close ties to Zuma, have manoeuvred themselves into a position where they allegedly wield control over state-owned companies and their huge procurement budgets, diverting huge sums into their own pockets and, by extension, Zuma’s family.

The Guptas are a family of Indian immigrants who arrived in South Africa from the early 1990s onwards, apparently spurred by the business promise of a newly democratic, post-apartheid state.

The family is headed by three brothers — Ajay, Atul and Rajesh.

So closely have the Zumas and Guptas become entwined that they are popularly referred to as the Zuptas.

The key connection is Zuma’s son, Duduzane, whom the Gupta brothers took under their wing a decade ago and groomed for a role as a director – and billionaire shareholder – in the family’s business empire.

The Guptas are allegedly able to influence state procurement through the cascading appointment of their cronies, via Zuma-appointed cabinet ministers to key positions on decision-making committees.

In several instances, would-be ministers have reportedly been informed of their cabinet appointments first by the Guptas, before receiving the official call from President Zuma.

All this has been highlighted by one of the biggest leaks in the history of South African journalism.

Earlier this year, investigative journalists obtained an enormous trove of emails and documents from the heart of the Gupta business empire. The subsequent exposés, dubbed the #GuptaLeaks, appear to confirm the state capture hypothesis that journalists have been chipping away at for years.

For example, the latest story from the leaks, published on Tuesday, reveals how the Guptas bankrolled the loan repayments for a house owned by President Zuma’s fourth wife.

They channelled the money in part via Duduzane, dipping into a Dubai-based slush fund set up to receive kickbacks from the successful Chinese winner of a major South African state locomotive tender.

The #GuptaLeaks have lifted the lid on a multinational money laundering machine, dubbed the Dubai Laundromat, into which the Guptas allegedly funnel cash derived from state contracts in South Africa.

How did the Guptas benefit financially?

The cash is derived in two ways: either directly from contracts with state-owned companies won by Gupta-owned businesses; or from “success fees” solicited from international companies wanting to do business with the South African state.

So far, the #GuptaLeaks have exposed how kickbacks were paid or facilitated to the Guptas by foreign companies throughout the world.

They include a Swiss construction company, two German IT giants, a multinational management consultancy, a Chinese state outfit, and a major accounting firm.

And the Guptas certainly know how to spend their gains.

Having operated somewhat under the radar during the early years of Zuma’s presidency, the Guptas shot to national infamy in 2013 when they persuaded a raft of government departments to bend the law, allowing them to land an airliner of wedding guests from India at a high-security military air base near the capital, Pretoria.

The South African “wedding of the millennium” between a Gupta niece and her Indian fiancé, was designed to showcase the family’s wealth and influence in their adopted home.

Their Indian guests were whisked to the sprawling Sun City leisure complex by a VIP convoy of blue light-fitted vehicles normally reserved for government dignitaries, where they mingled with a who’s who of South African politicians and businessmen.

An inquiry held in response to the public outrage about multiple breaches of national security and protocol heard that “Number One” – an apparent reference to President Zuma – had pulled strings in the Guptas’ favour.

The #GuptaLeaks have subsequently revealed how the Guptas sucked cash out of a state-funded rural development programme and sent it to Dubai, where it briefly washed through the “Laundromat” of Gupta companies before it was used to pay the wedding bills back in South Africa.

KPMG said it “stood by our work done and audit opinions issued”, but its former Africa head attended the wedding and wrote thanking the Guptas gushingly afterwards: “I have never been to an event like that and probably will not because it was an event of the millennium.”

Meanwhile, the leaks have also unearthed a letter, drafted by the Guptas on President Zuma’s behalf, in which they ask the Abu Dhabi crown prince to consider granting Zuma and his family residency in the country. While Zuma denied wishing to make the emirate a “second home” it has been confirmed that Duduzane obtained residency.

Suspicions that the Guptas have been preparing a Dubai bolthole for Zuma were enhanced by media reports, based on the leaks, that the Guptas had acquired a £19-million mansion in an exclusive Dubai neighbourhood intended for Zuma’s use. The property is just a few doors down from a pad owned by Zimbabwe dictator Robert Mugabe.

Zuma’s spokesperson said he owned no property outside South Africa.

Paralysis of the proud ANC

Throughout these, and many other scandals throughout the Zuma presidency, the once-proud African National Congress (ANC) party has stood paralysed, unable or unwilling to confront the Zupta state capture phenomenon.

With many of its officials allegedly “captured” by the Guptas, the ANC’s inaction is perhaps unsurprising.

The social cost has been enormous – not least in the fraying of race relations which Mandela’s ANC worked so hard to build.

As the public outcry against the Guptas reached a crescendo last year, UK public relations firm Bell Pottinger – founded by Margaret Thatcher’s former PR guru Lord Tim Bell – stepped into the breach to spin for the Guptas on a £100,000-a-month contract.

So, despite the mountain of dirty laundry already in the public domain about the Guptas relationship with Zuma, the firm accepted a brief – partly in consultation with Zuma’s son Duduzane – to run a counter-campaign blaming white-owned businesses for perpetuating “economic apartheid” in South Africa.

Somehow, it was “white monopoly capital” standing in the way of genuinely aspirant black businessmen – like the immigrant Gupta family – from fulfilling their full economic potential in the country.

Bell Pottinger now stands accused of stoking racial tension in the country, aimed at its white population in general and at the media in particular.

A pop-up movement called Black First Land First has subsequently targeted editors and journalists at the forefront of exposing the Guptas’ dealings.

At one point, Bell Pottinger gave feedback about a prospective article proposed by the movement’s leader. The PR firm also scripted speeches subsequently delivered by ANC politicians at political rallies.

For the past eighteen months, an army of fake Twitter bots and one-man blogs have spewed a torrent of racially-charged invective into public discourse around the Guptas and Zuma.

Although such tactics have not been conclusively shown to be the brainchild of Bell Pottinger, a public outcry forced them to drop the Guptas last year.

He then told the BBC in an interview last week: “At worst, we were very naive in what we got involved with, but there was, at any point, no intention to create the impact that is claimed we created.”

But the atmosphere in South Africa remains poisonous. Black First Land First recently barricaded an editor in his home, scrawling graffiti on his garage door, and assaulting a colleague.

Ignoring a subsequent court order barring them from intimidating journalists, the same group hijacked a public event hosted by investigative journalists to explain the #GuptaLeaks, manhandling a journalist to the ground.

A judge ruled earlier on Tuesday that the movement was in contempt of court, and handed its leader a three-month jail sentence, suspended on condition that they did not breach the order again.

For his part, Zuma will seek to direct the appointment of his successor to protect him and his family from future prosecution when his term as president ends in 2019.

But if he does one day face trial, expect the #GuptaLeaks to feature strongly as evidence.

*Finance Uncovered (@FinUncovered) is an associate of the #GuptaLeaks investigative team. This article first appeared in The Independent (UK).