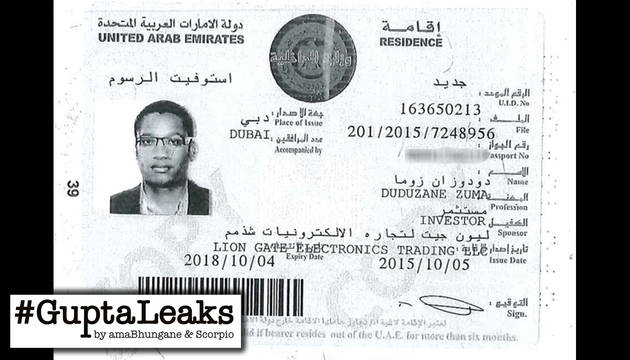 Duduzane’s profession on the coveted residency is listed as “investor” and his sponsor “Lion Gate Electronics Trading”.

The permit was issued on October 10, 2015 and expires on October 4, 2018. It was issued a few months before two letters which appear to have been drafted on behalf of President Zuma were circulated between Tony Gupta to Sahara CEO, Ashu Chawla and Duduzane Zuma.

Leaked emails have also revealed that two months later, in December 2015, Duduzane, with the help of the Gupta family, bought an R18 million apartment situated in Burj Khalifa, the tallest building in the world. Duduzane, through Wens Holdings Ltd, co-owned with the Gupta family and registered in Dubai bought the luxury apartment.

Both letters heap praise on the leaders and request their “guidance” with regard to making the UAE a second home.

“I fondly remember our meeting in the UAE [United Arab Emirates] and the gracious hospitality and warmth extended to me during my visit. It is with this sentiment that I am happy to inform you that my family has decided to make the UAE a second home.

“It will be a great honour for me and my family to gain your patronage during our proposed residency in the UAE,” reads one of the letters penned by the Guptas on Zuma’s behalf. Two months later, Zuma visited Dubai as a last-minute stop-over during his visit to Saudi Arabia. At this meeting the President met Sheikh Mohammed Bin Rashid Al Maktoum, to reportedly discuss a “number of regional issues”.

After the revelations President Zuma through his spokesperson, Bongani Nqulunga, denied that he had any intention of living anywhere else.

“I have my home in Nkandla and I have no intention of living anywhere else. When I retire I will go home to Nkandla. This is a pure fabrication. Duduzane has never spoken to me about living in any other country. He has never shown me any letter. It’s shocking in the extreme. It’s absolute mischief aimed at sowing confusion”.

Obtaining the coveted residency of the UAE is not easy. The first option requires the applicant to have purchased a property valued at no less than 1 million dirhams. This option does not require the applicant to register a company.

In this instance the residency visa is only valid for two years and does not grant the right to work in the UAE.

The second option requires the registration of a company in one of the Free Trade Zones in the UAE. It enables the applicant, as a shareholder of the company, to apply for residency.

This type of visa is valid for three years. In Duduzane Zuma’s case this is the type of residency he appears to have gained. Emails to Duduzane Zuma with regard to his residency have remained unanswered.