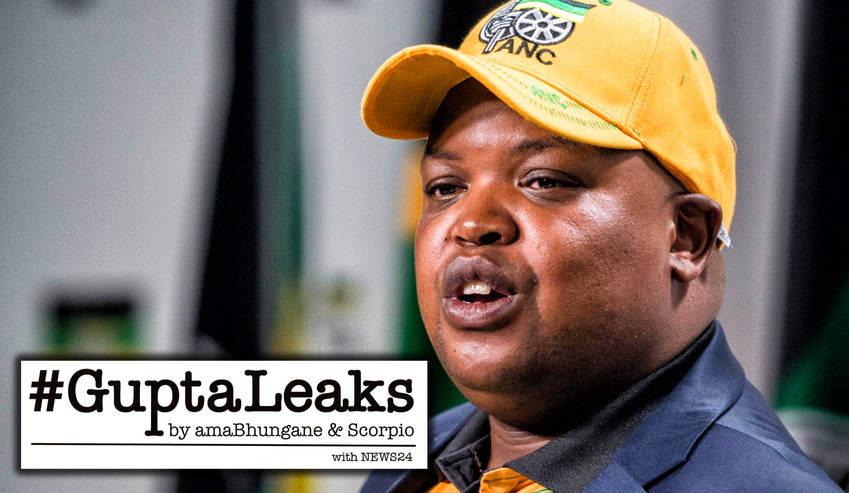 This time they charged £340,086 for a four-day trip which included a suggested speech for Collen Maine for the ANCYL’s National Rally on 7 February 2016 in Tshwane.

The team also composed a statement for the MK Veterans Association and suggested the firm might like to add to a statement by ANC North West Chair, Supra Mahumapelo, with regard to EFF leader Julius Malema’s threats to ban ANN7 journalists.

Six members of the Bell Pottinger team flew into Johannesburg from London between February 3 and February 7 2016 on a four-day boot camp to assist Gupta family businesses, the ANCYL, as well as Kebby Maphatsoe’s MK Veterans Association to communicate a narrative about the country’s economy from Oakbay’s perspective.

On February 6, 2016, a release by Mondli Mkhize, National Spokesperson for the ANCYL, with regard to a national rally that was due to take place on February 7 in Tshwane, was forwarded to the Bell Pottinger team, a trove of emails known as the #GuptaLeaks has revealed.

On the same day Victoria Geoghegan thanks the team for forwarding the notice, adding, “Are we able to supply points for the ANCYL leader? Can you find out from Mondli which journalists they are expecting to attend/report on the march?”

Later the same day, Geoghegan sent an email to the Bell Pottinger team as well as Gupta associates, including Oakbay CEO, Nazeem Howa, and Sahara Computers head of sales and marketing, Santosh Choubey, stating, “Please see below suggested content for ANCYL leader. This is deliberately short to ensure a clear message and soundbites for media.”

The following day, Bell Pottinger’s Nick Lambert thanked Choubey for forwarding a YouTube clip of Maine speaking saying “some very interesting remarks by the Youth Leader, and some good messages for us”.

He highlighted some of Maine’s key moments as “early remarks:

Unemployment persists”, as well as “the EFF seeks to destroy those who tell good news in the media, and which is in the interests of our country – in particular ANN7 and New Age – these are for the people”, and “ANC respects the people, the markets do not.

The markets are controlled in London.
What they are doing to the Rand is not ok.”

The previous day, 5 February, Geoghegan edited and added to a draft statement penned by Oakbay CEO Nazeem Howa on behalf of the the MK Veterans’ Association with regard to Tegeta Exploration’s buying of the Optimum and Koornforntein coal mines.

Howa’s was a short statement to which Geoghegan added several paragraphs attacking the EFF.

In the end, the statement (with Geoghegan’s additions in red) that was sent out on behalf of MKVA read:

The Bell Pottinger team were kept busy during their visit.

One of the tasks, it appears from leaked emails, is an offer to assist ANC Bokone Bophirima Provincial Chairperson, Supra Mahumapelo, with a statement issued by his behalf by media officer Diale Kgantsi and attacking EFF CIC Julius Malema for banning ANN7 journalists from EFF events Geoghegan writes on 6 February, in response to the statement mailed to her”

“This content is broadly fine. If we think that the material will have more gravitas, or get more media pick up either *going out from ANC central command; and or * from one of the provinces…then we recommend that that take place.”

A message from the Bell Pottinger team reads, “this was released by one of the provinces. If you want to add something and release by the other provinces we will felicitate (sic). Kindly Advise”.

On 7 February, Geoghegan sent a note to the South African team confirming “actions” which included “BP to develop narrative”, “BP to draft Q&A” [About Oakbay and the Gupta family’s business interests], “SA team to forward requested facts”, “SA team to provide regular updates to BP re: on the ground developments.”

On February 11, long after Bell Pottinger had done their work and were safely back in London, Nazeem Howa forwarded to Bell Pottinger’s Nick Lambert a YouTube clip of ANC Deputy Secretary General, Jessie Duarte, being interviewed by the SABC:

Lambert replies: “Thank you. Some very positive messaging in this for us. Particularly like that Duarte’s language echoes that of Bell Pottinger’s mail from Sunday night. Let us deal in ‘cold, hard facts’ not innuendo.”

Daily Maverick approached Duarte with regard to Lambert’s comment. She responded that she had never met Bell Pottinger nor did she discuss any narrative with anyone.

“I answered questions put to me by an SABC journalist. I did not know what I would be asked. I also want to add that I have never discussed with any person how to answer questions,” said Duarte.

A request by the Daily Maverick to Geoghegan for an interview with regard to these as well as other revelations in the leaked emails has remained unanswered.